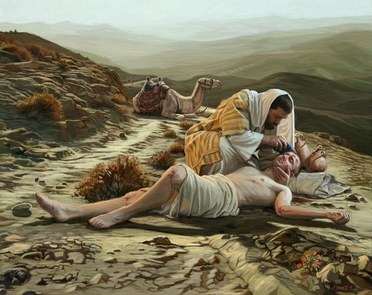 Would You Help The Outcasts?
By Mark Flippo

​Luke Chapter 10
30-And Jesus answering said, A certain man went down from Jerusalem to Jericho, and fell among thieves, which stripped him of his raiment, and wounded him, and departed, leaving him half dead.
31-And by chance there came down a certain priest that way: and when he saw him, he passed by on the other side.
32-And likewise a Levite, when he was at the place, came and looked on him, and passed by on the other side.
33-But a certain Samaritan, as he journeyed, came where he was: and when he saw him, he had compassion on him,
34-And went to him, and bound up his wounds, pouring in oil and wine, and set him on his own beast, and brought him to an inn, and took care of him.
35-And on the morrow when he departed, he took out two pence, and gave them to the host, and said unto him, Take care of him; and whatsoever thou spendest more, when I come again, I will repay thee.
36-Which now of these three, thinkest thou, was neighbour unto him that fell among the thieves?

Do you stop for the bum in the alley? Do you help in a food kitchen for the homeless? Do you give to food pantries? How do you help those in desperate situations? Are you a good Samaritan? Do you stop and see if you can help those living under a bridge? Does seeing a child in rags because they are living in their car touch you? Will you step up and do these things wisely? Don't go by yourself. Use Wisdom. Have heart.
Go and be a blessing to those that can not ever pay you back!