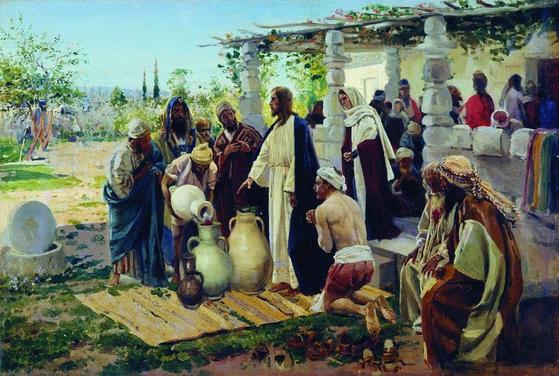 Party In Cana!
By Mark Flippo

In that culture, such a miscalculation of wine would have been a great humiliation for the bride and groom. Mary turned to Jesus and said, "They have no more wine." "Dear woman, why do you involve me?" Jesus replied. "My time has not yet come."
His mother said to the servants, "Do whatever he tells you." (John 2:3-5, NIV) Nearby were six stone jars filled with water used for ceremonial washing. Jews cleansed their hands, cups, and vessels with water before meals. Each large pot held from 20 to 30 gallons.
Jesus told the servants to fill the jars with water. He ordered them to draw some out and take it to the master of the banquet, who was in charge of food and drink. The master was unaware of Jesus' turning the water in the jars into wine. The steward was astounded. He took the bride and groom aside and complimented them. Most couples served the best wine first, he said, then brought out cheaper wine after the guests had too much to drink and would not notice. "You have saved the best till now," he told them (John 2:10, NIV).​

Jesus learned obedience in His home. He obeyed His mother's request even though being God in the flesh He did not have to.
There is a power in obedience that many do not understand.
Jesus gave us the example because of several reasons. Teaching us to respect our parents no matter how old we get.
You can be a blessing to any group you are with when you honor an older person. He cleansed everything to do with the touching of this Miracle. If you want a Miracle you will do what it takes to help it happen! Pray about your desire and make sure you are in the will of God while you are waiting.