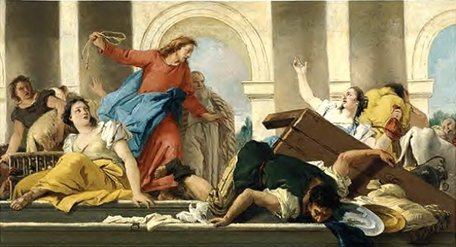 Does Your Church Need Cleansing?
By Mark Flippo

Mathew 21
11-The crowds replied, “This is Jesus, the prophet from Nazareth in Galilee.” 12-Then Jesus went into-the temple courts and drove out all who were buying and selling there. He overturned the tables of the money changers and the seats of those selling doves. 13-And He declared to them, “It is written: ‘My house will be called a house of prayer.’ But you are making it ‘a den of robbers.’”
​
All congregations need cleansing! We have slipped from Jesus teachings. What is allowed in most churches would make Jesus want to open up the Earth again like He did with the tribe of Korah! Pastors doing things themselves that they used to teach against! Shame has been brought into most congregations. How can God do the things He wants to do with so much sin in our midst? Christianity seems to be more in name than the heart. Most have become weak. It is popular to be a Christian right now but when it changes will you still call yourself a Christian?