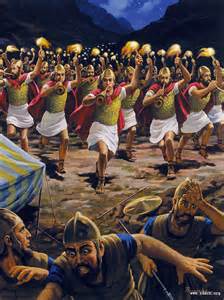 Battle of Gideon
By Mark Flippo

Judges 7 (NIRV)
Gideon Wins the Battle Over the Midianites 1-Early in the morning Jerub-Baal and all his men camped at the spring of Harod. Jerub-Baal was another name for Gideon. The camp of Midian was north of Gideon’s camp. It was in the valley near the hill of Moreh. 2-The Lord said to Gideon, “I want to hand Midian over to you. But you have too many men for me to do that. Then Israel might brag, ‘My own strength has saved me.’ 3-So here is what I want you to announce to the army. Tell them, ‘Those who tremble with fear can turn back. They can leave Mount Gilead.’ ” So 22,000 men left. But 10,000 remained.
4-The Lord said to Gideon, “There are still too many men. So take them down to the water. There I will reduce the number of them for you. If I say, ‘This one will go with you,’ he will go. But if I say, ‘That one will not go with you,’ he will not go.”
5-So Gideon took the men down to the water. There the Lord said to him, “Some men will drink the way dogs do. They will lap up the water with their tongues. Separate them from those who get down on their knees to drink.” 6-Three hundred men brought up the water to their mouths with their hands. And they lapped it up the way dogs do. All the rest got down on their knees to drink.
7-The Lord spoke to Gideon. He said, “With the help of the 300 men who lapped up the water I will save you. I will hand the Midianites over to you. Let all the other men go home.” 8-So Gideon sent those Israelites home. But he kept the 300 men. They took over the supplies and trumpets the others had left.