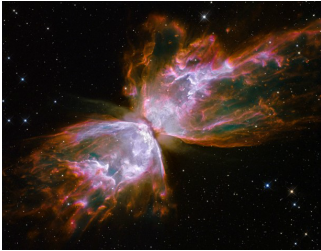 A dying star that was once about five times the mass of the Sun is at the center of this fury. It has ejected its envelope of gases and is now unleashing a stream of ultraviolet radiation that is making the cast-off material glow. This object is an example of a planetary nebula, so-named because many of them have a round appearance resembling that of a planet when viewed through a small telescope. Thank You to NASAs Hubble Telescope.

Even in death you can give forth a heavenly light! All that has led you in your life will be seen in others that you have touched! Your can affect so many during your lifetime, but your releasing of that powerful light that has grown brighter over the years will touch even more! Keep your light shining all the time. Light the way to Jesus for the lost and those that are traveling the wrong path! Just because someone lost their way does not mean they are lost forever!