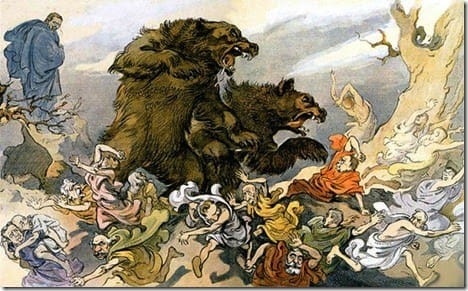 Elisha And The Two Bears
By Mark Flippo

2 Kings 2:
23-Then he went up from there to Bethel; and as he was going up by the way, young lads came out from the city and mocked him and said to him, “Go up, you bald head; go up, you bald head!” 24-When he looked behind him and saw them, he cursed them in the name of the LORD. Then two female bears came out of the woods and tore up forty-two lads of their number. 25-And he went from there to Mount Carmel, and from there he returned to Samaria.

This is a lesson on disrespecting True Prophets and Pastors of God! God will bring down judgement upon the head of anyone that choses that way of treating God's representative! Not all that claim to be from God are from God! It brought death in the Old Testament but it will bring spiritual and maybe physical death in our time! Do not take that risk. Teach your children the right attitude toward God.