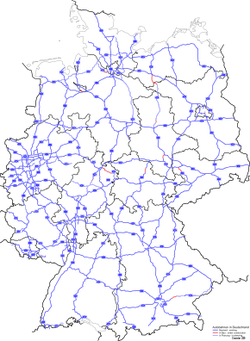 The Autobahn
Shared By Mark Flippo

The Autobahn (German: Autobahn, plural Autobahnen) is the federal controlled-access highway system in Germany. The official German term is Bundesautobahn (plural Bundesautobahnen, abbreviated BAB), which translates as "federal motorway". The literal meaning of the word Bundesautobahn is "Federal Auto(mobile) Track".

German Autobahnen have no federally mandated speed limit for some classes of vehicles. However limits are posted (and enforced) in areas that are urbanized, substandard, accident-prone, or under construction. In case of bad weather, speed limits come into play and are frequently enforced. On speed-unrestricted stretches, an advisory speed limit (Richtgeschwindigkeit) of 130 kilometres per hour (81 mph) applies. A 2008 estimate reported that 52% of the autobahn network had only the advisory speed limit, 15% had temporary speed limits due to weather or traffic conditions and 33% had permanent speed limits. Measurements from the German State of Brandenburg in 2006 showed average speeds of 142 km/h (88 mph) on a 6-lane section of autobahn in free-flowing conditions.

I prefer slower. I guess it would be like a duck out of water! When you are younger you kinda like going faster! I wonder how many times I missed the Voice of God being in such a hurry? Did He try to warn me of an upcoming accident, but I was to busy to hear? We need to slow down our minds so God can get a word in between our super busy thoughts! I have had too many tragedies in my life! It is now Life and Death time to be listening! Horrible events are happening around the globe! We have to get sensitive to God's Still Small Voice! His Spirit is like a Dove easily given to leaving any uncomfortable situation. You must entertain Him with Blessings, Thankfulness, Praise, and you know the rest. Just do it gently don't yell at Him! He will come close to you if He trusts you! It will take practice to get Him to stay. You must repent before you invite Him to come close! He is gentle like a lamb just remember those things to develop your relationship with Him!!!