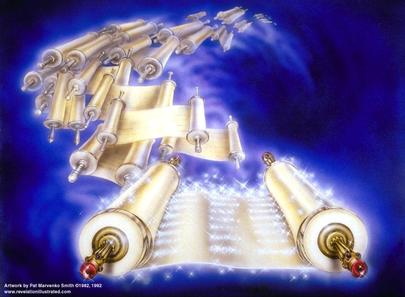 The Books Are Opened!
By Mark Flippo

​Revelation Chapter 20
12-And I saw the dead, small and great, stand before God; and the books were opened: and another book was opened, which is the book of life: and the dead were judged out of those things which were written in the books, according to their works.
13-And the sea gave up the dead which were in it; and death and hell delivered up the dead which were in them: and they were judged every man according to their works.
14-And death and hell were cast into the lake of fire. This is the second death.
15-And whosoever was not found written in the book of life was cast into the lake of fire.

This is the final reading of God's will! No one can escape this final judgement! There is no talking your way out of it. No gift of gab will help you out. You better make yourself ready now because you don't know when your time is up. Maybe it will be right now! You can live in fear of your time ending but why do that? Repent now, become baptized now, be filled with His Spirit now! Then it will not matter when or how you die. Peace is a wonderful blessing when you are right and tight with our Father!
​
​http://moderndayparablesrcf.com