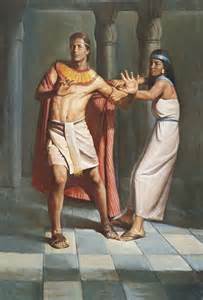 No, Means No!
By Mark Flippo

Genesis 39:
11-One day he went into the house to attend to his duties, and none of the household servants was inside. 12-She caught him by his cloak and said, “Come to bed with me!” But he left his cloak in her hand and ran out of the house.

Now this adulteress (that is saying it nicely) thought she would have her way with this servant. He had to do what she said, right? She had played it out in her mind. Her motor was running in high gear. She was horny! Well she was! She was shocked and surprised that he refused her advances. She was very offended! The old saying "hell hath no fury like a woman scorned/rejected!
​She made some fast decisions on how to get even with Joseph! How dare he reject her. She was use to getting her way. She lied! If her husband had believed her he would have had Joseph killed. So to sooth his poor abused wife's feeling (Barf) he had him sent into the dungeon. They had no way of knowing that they were doing God's will. He was set to fulfill his greatest destiny! I wonder what she thought after he was made second in command of the kingdom.