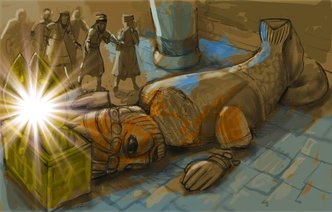 All Broken Up
By Mark Flippo

What you can learn from this lesson is, don't make God angry!
Emerods are tumors which are most of the time hemorrhoids.
They can bleed and cause serious health problems. God will visit upon you something that will make your life miserable when you do not follow His directions. He made an example of these people so that others will know that Jehovah is the One True God! If you doubt Him just try and cause trouble with His True children, the Church of the living God! Give your friends notice to avoid you during this time of rebellion. Lightning bolts can be painful!