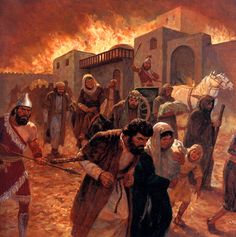 Fall and Captivity of Judah
By Mark Flippo

586 BC is when Jerusalem was destroyed! This was the last of the Old Testament Hebrews. During their captivity they were married and given in marriage so much  there was no pure blood Hebrews left! Now they became known as Jews. This is a very different people than before. The Ashkenazi were gentiles from Germany that converted to Judaism. Sephardic were gentiles that came from Spain and Portugal. Mizrahi were gentiles that converted from the orient. Ethiopian were gentiles converted from Africa. All of these became proselytes who converted to Judaism. When they came back together it was a concentration of bringing back the nation of Israel. It was more a governmental conversion than a God conversion.
There are more that believe in the Kabbalah than the Old Testament. Brought with them from Babylon. We need to pray for all of the people of the world. True Christianity is the bride of Christ!
​
http://moderndayparablesrcf.com