Have a Blessed and
​ Safe Thanksgiving Season! 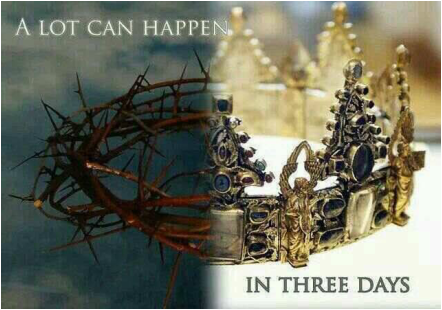 In Three Days
By Mark Flippo

The number 3 is used 467 times in the Bible. It pictures completeness, though to a lesser degree than 7. The meaning of this number derives from the fact that it is the first of four spiritually perfect numerals (the others being 7, 10 and 12). The 3 righteous patriarchs before the flood were Abel, Enoch and Noah. After the deluge there was the righteous "fathers" Abraham, Isaac and Jacob (later renamed Israel).

There are 27 books in the New Testament, which is 3x3x3, or completeness to the third power. Jesus prayed three times in the Garden of Gethsemane before His arrest. He was placed on the cross at the 3rd hour of the day (9 a.m.) and died at the 9th hour (3 p.m.). There were 3 hours of darkness that covered the land while Jesus was suffering on the cross from the 6th hour to the 9th hour. Three is the number of resurrection. Christ was dead for three full days and three full nights, a total of 72 hours, before being resurrected on Saturday, April 8, just before sunset.

The apostle Paul was an exceptionally well educated person. In three different occasions he quotes directly from Greek poets (Acts 17:28, 1Corinthians 15:33 and Titus 1:12). He also was privileged to visit the location of God's throne, which is in the third heaven (2 Corinthians 12:2 - 4).

This is no doubt in my mind the Power of God's choices in time frames!