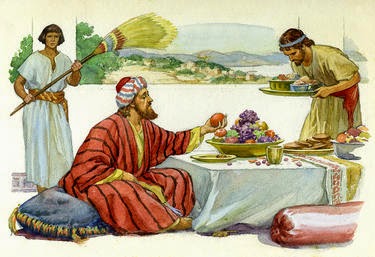 The Rich Man And Lazarus
By Mark Flippo

Luke 16
19-“There was a rich man who was dressed in purple and fine linen and lived in luxury every day. 20-At his gate was laid a beggar named Lazarus, covered with sores 21-and longing to eat what fell from the rich man’s table. Even the dogs came and licked his sores. 22-“The time came when the beggar died and the angels carried him to Abraham’s side. The rich man also died and was buried. 23-In hell, where he was in torment, he looked up and saw Abraham far away, with Lazarus by his side. 24-So he called to him, ‘Father Abraham, have pity on me and send Lazarus to dip the tip of his finger in water and cool my tongue, because I am in agony in this fire.’ 25-“But Abraham replied, ‘Son, remember that in your lifetime you received your good things, while Lazarus received bad things, but now he is comforted here and you are in agony.

Well this is a little different way to look at this parable. The rich man call on his father Abraham. It did him no good. You may have known Jesus at one time but it will not help you after death. You can ask Him remember when and He will say "Depart from me ye worker of iniquity!" What you had in the past is lost if you have not kept current with your salvation!
​You must keep praying and living Christ attributes in you everyday! It would be such a sad waste of your life to work for Jesus until the last and quit trying and lose out with Him!
Is He your Father now even more than when you first believed? Have you changed? Get right now and not worry about tomorrow!