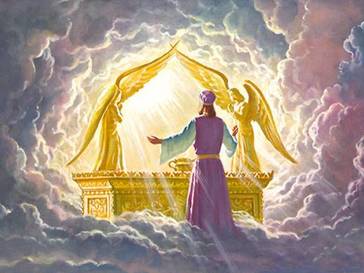 The Other Ark!
By Mark Flippo

The Ark of the Covenant, also known as the Ark of the Testimony, is a gold-covered wooden chest described in the Book of Exodus as containing the two stone tablets of the Ten Commandments. According to various texts within the Hebrew Bible, it also contained Aaron's rod and a pot of manna.

The biblical account relates that, approximately one year after the Israelites' exodus from Egypt, the Ark was created according to the pattern given to Moses by God when the Israelites were encamped at the foot of biblical Mount Sinai. Thereafter, the gold-plated acacia chest was carried by its staves while en route by the Levites approximately 2,000 cubits (approximately 800 meters or 2,600 feet) in advance of the people when on the march or before the Israelite army, the host of fighting men. When carried, the Ark was always hidden under a large veil made of skins and blue cloth, always carefully concealed, even from the eyes of the priests and the Levites who carried it. God was said to have spoken with Moses "from between the two cherubim" on the Ark's cover. When at rest the tabernacle was set up and the holy Ark was placed under the veil of the covering the staves of it crossing the middle side bars to hold it up off the ground.

Sometimes God will keep your inner beauty hidden until it is your time to shine! Never be discouraged that you may feel that you are under used. In God's timing is everything. Your most beautiful time is still ahead. What will He ask of you? Be ready by staying prayed up. Keep your attitude right. Always treat your Savior with Respect and Reverence. Have a Praise in your heart and Worship on your mind 24/7/365. Be sensitive to the moving of Him as a Holy Dove. Let Him know He is the most important Love of your life. Like Joseph, He will lift you up in the proper time!