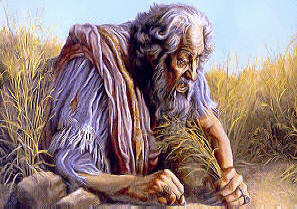 
Nebuchadnezzar had a dream about a mighty tree that reached the heavens and was visible to the ends of the earth. The tree provided shade and food for all manner of animals and birds.  Heavenly beings decreed that the tree be chopped down, its branches and leaves stripped, and its fruit scattered. The tree’s stump remained with the beast of the grass.  Nebuchadnezzar asked Daniel to interpret the dream.
Daniel told King Nebuchadnezzar that he was the tree that would be chopped down.  Nebuchadezzar would lose his sanity and kingdom. He would dwell with beasts in the field and eat grass like oxen. Only when Nebuchadnezzar acknowledged that God gave him the Chaldean kingdom, would Nebuchadnezzar recover his mind.  Daniel implored the king to break off his sins and show mercy to the oppressed.
​
Despite Daniel’s warning, King Nebuchadnezzar did not change his behavior. After 12 months, the king walked on the palace roof admiring his power and majesty. While he was speaking words of self-praise, a voice from heaven told Nebuchadnezzar that God’s time of judgment was now. Nebuchadnezzar lost his sanity. He went to the fields and ate grass. His body became wet from the dew of heaven. Nebuchadnezzar’s hair grew long as eagle’s feathers and his nails were like bird’s claws.