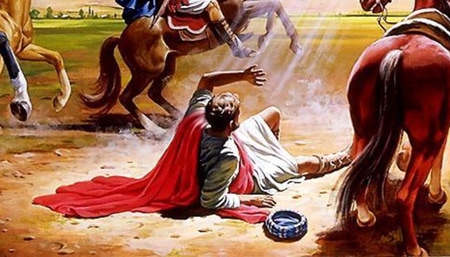 Say What?
By Mark Flippo

Acts 9:3–9, NIV
As he neared Damascus on his journey, suddenly a light from heaven flashed around him. He fell to the ground and heard a voice say to him, "Saul, Saul, why do you persecute me?"
"Who are you, Lord?" Saul asked. "I am Jesus, whom you are persecuting," he replied. "Now get up and go into the city, and you will be told what you must do." The men traveling with Saul stood there speechless; they heard the sound but did not see anyone. Saul got up from the ground, but when he opened his eyes he could see nothing. So they led him by the hand into Damascus. For three days he was blind, and did not eat or drink anything.
​
Before his conversion, Paul, then known as Saul, was a "zealous" Pharisee who "intensely persecuted" the followers of Jesus. Paul also discusses his pre-conversion life in his Epistle to the Philippians 3:4-6 and his participation in the stoning of Stephen is described in Acts 7:57-8:3.

This proves it does not matter who you are now! God can change the worst of humanity! Pray for the one you know that needs a visitation from God! Be prepared for any answer, even if it is a very unexpected one.