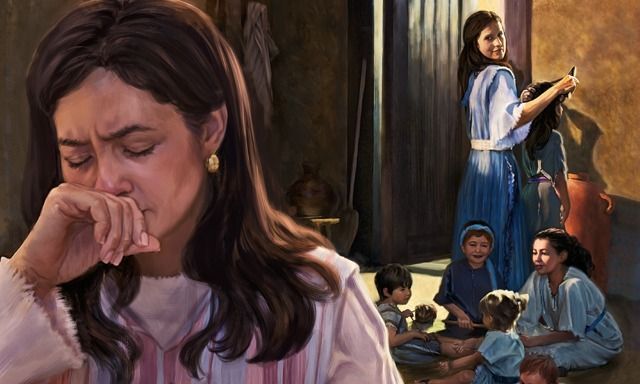 Weeping For Now!
By Mark Flippo

In its depiction of Elkanah’s two wives, the Bible contrasts Peninnah, who had children, and Hannah, who was barren. The Rabbis state that Hannah was Elkanah’s first wife; after they had been married for ten years, and he saw that Hannah bore him no children, he also took Peninnah as a wife . The Mishnah ordains that when a couple has been married for ten years without bringing any children into the world, the husband is required to take a second (or additional) wife in order to fulfill the commandment to be fruitful and multiply .

Peninnah’s children are mentioned only briefly in the Book of Samuel (I Sam. 1:4): “Elkanah offered a sacrifice. He used to give portions to his wife Peninnah and to all her sons and daughters.” According to the midrash, she had ten sons. This tradition is based on Elkanah’s question to Hannah (v. 8): “Am I not more devoted to you than ten sons?” He thereby seeks to console Hannah by asserting that his love exceeds that of Peninnah’s ten sons. I Sam. 1:6 tells of the tension between Peninnah and Hannah caused by the latter’s infertility: “Moreover, her rival, to make her more miserable, would taunt her that the Lord had closed her womb.”

I Sam. 2:21 attests that the Lord took note of Hannah and “she conceived and bore three sons and two daughters.” The midrash tells that when Hannah bore her children, Peninnah was punished: Hannah would give birth to one child, and Peninnah would bury two; Hannah bore four, and Peninnah buried eight. When Hannah was pregnant with her fifth child, Peninnah feared that now she would bury her last two children. What did she do? She went to Hannah and told her: “I know that I have sinned against you. I beg you, pray for me, so that my two remaining sons will live.” Hannah prayed to God, and said: “Please, leave her the two sons and let them live.” God responded: “By your life, they deserve to die, but since you have prayed that they live, I will call them by your name.” Thus, even though Hannah bore only five children, she says in her song (I Sam. 2:5): “While the barren woman bears seven,” for Peninnah’s two sons were reckoned as Hannah’s

Peninnah came to Hannah and asked for forgiveness. You remain Faithful and God will make things right with your enemy!