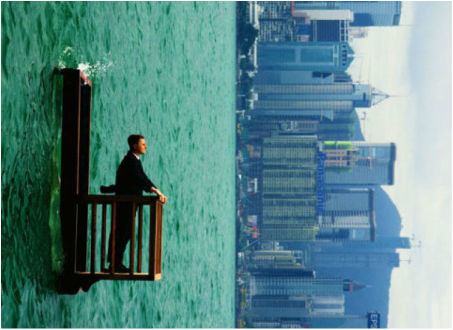 None of the work of artist Philippe Ramette is ever Photo-shopped, including this unbelievable scene. Ramette believes nothing in art should ever be faked, and for this shot he commissioned a small barge resembling a sideways balcony, fastened his feet to the wall, and held onto the wooden rail as the photos were taken.

Are you real with people? Do you put on a fake front? Do you smile so no one will know how lonely or hurting that you truly are? I can remember being at a party and feeling so lonely! I wondered does anyone even care? I was afraid no one would have even missed me, had I vanished from that party! How many times have you felt that way! You have even felt that when you were with family! I now understand why I was feeling so alone!
​I did not have The Holy Spirit inside me. It was about a year and a half later that someone knocked on my door and invited me to Sunday School! I had grown up learning about God but never really knew Him in a personal way!  I was baptized for remission of my sins and came up out of the water feeling lighter! When I surrendered everything changed about me. I felt such elation I would just start laughing. People at work even noticed! When God fills you with His Spirit others notice without you even saying a word! Let Him change your forced smile to a true smile!