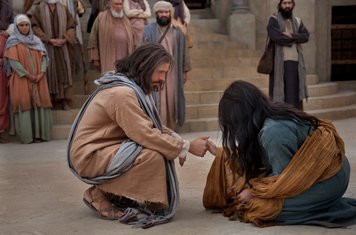 John 8 1-11
The religious leaders who brought the woman to Christ, preferring a charge against her, and trying to trap Him by asking what should be done to her, belonged to a class most eager to deal with harlots. They regarded themselves as custodians of public morality and woe be to those who came under the observation of these self-appointed inspectors of moral nuisances. Knowing all about the requirements and punishment of the Mosaic Law, and their own traditions surrounding it, they treated sinners with sanctimonious contempt. To them, it was sinful to be touched by a woman like the one they brought to Jesus, but as we shall see, their zeal against the sins of others was only a cloak to cover their own vileness.
How partial those accusers were! They brought the woman taken in the very act of adultery, but where was the man, the chief offender? Why was he not brought? Was he a Pharisee belonging to our Lord’s enemies, and one whom policy demanded should be allowed to escape? The law and justice demanded that the adulterer and the adulteress should be brought together and be put to death (Leviticus 20:10), but true to the way of the world those foes of Christ made the woman bear the severity of her offense. Divine justice, however, is “without partiality” (James 3:17).
​(Bible Gateway)