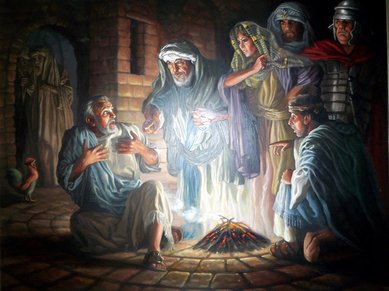 John 18:15-27 (NKJV)
15-And Simon Peter followed Jesus, and so did another disciple. Now that disciple was known to the high priest, and went with Jesus into the courtyard of the high priest. 16-But Peter stood at the door outside. Then the other disciple, who was known to the high priest, went out and spoke to her who kept the door, and brought Peter in. 17-Then the servant girl who kept the door said to Peter, “You are not also one of this Man’s disciples, are you?”
He said, “I am not.”
​25-Now Simon Peter stood and warmed himself. Therefore they said to him, “You are not also one of His disciples, are you?”
He denied it and said, “I am not!”
26-One of the servants of the high priest, a relative of him whose ear Peter cut off, said, “Did I not see you in the garden with Him?” 27-Peter then denied again; and immediately a rooster crowed.

When things are going good it is easy to call yourself a Christian. True character is tested when there is a chance to receive punishment for belonging to Jesus. What will you do when you are tested, because you will be at some point? I hope we will all answer correctly. Peter was given an opportunity to repent. Which He did and then followed Jesus until his death. Do you have the strength of character to identify with Christ? If you have any question about that answer talk to Jesus about it. Let Him help you overcome any fear you have. That way there will be no doubt about your answer.