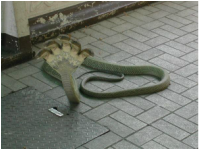 Which One Is The Real One?
By Mark Flippo

In this case I would be confused from either side of this snake!
The photo may be phony but wouldn't it be a bit confusing for the snake? One head wanting to go this way and another wanting to go that way! I do not understand the people who believe in multiple god's. I would be completely beside myself. Confusion would reign. I would never know which one to believe. Like Grecian and Roman god's they gave them human qualities. As long as they prayed to them they had power over them. When the worship stopped so did they. Get the picture? We have to work on ourselves and stop giving power to the wrong things.